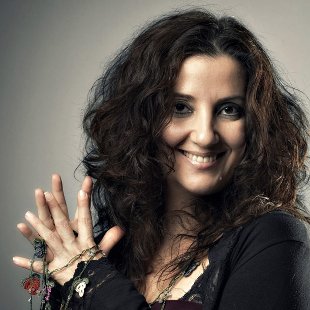 In the workshop we will study songs mainly  from the regions of Northern Greece, focusing on a repertoire related to the populations of this region, whether they are indigenous or coming from other regions. The islands of the North and East Aegean, Macedonia, Thrace, Eastern Romulia and of course Istanbul, will also be our study areas.

We will deconstruct the melodies of the songs, isolating ornaments, shootings, variations and using them as exercises of the voice but also as tools for studying the art of traditional singing.

The workshop is aimed for amateurs , professional singers, as well as students of any kind of level

Katerina was born in Athens. At the age of eight she became a member of the traditional music choir of I. Tsiamoulis where she attended classes in folk song, Byzantine music and traditional dances of Greece while she participated in the concerts and record productions of the choir.

At the age of thirteen she attended lessons in oud and also Byzantine music with Christos Tsiamoulis.

In 1991 she represented Greece at the World Youth Festival (JMF-Jeunesse Musiqual de France) held in Paris playing the oud and singing. From 1993 and for nine years after that she worked as an oud teacher at the Experimental Music High School-Lyceum of Pallini. In 1995 she taught seminars on Greek folk music in high schools and lyceums in Finland. She also worked for five years at the Protipo Music Center of Piraeus, teaching oud lessons and being a member of the traditional orchestra of the Municipality of Piraeus.

She obtained a diploma in Byzantine music in June 2000 after a five-year apprenticeship with I. Arvanitis.

She has participated in various musical documentaries-tributes to rebetiko and  folk song of the Greek national television and more.

In the field of the Greek folk music she has collaborated in concerts and recordings for a number of years with: Domna Samiou, Archive of Greek music, Center for Asia Minor Studies, Archive of Greek discography etc. while in the field of contemporary Greek song with: N. Xydaki, N. Papazoglou, P. Dourdoumbaki, Orchestra of Colors, P. Thalassino etc.

In the field of the European music scene, since 2013 she has collaborated with Jordi Savall in concerts in Europe and Asia for the programs: “Mare Nostrum”, “Esperit del Balkans”, “Pèlerinages De l ‘Ame”, “Orient, Occident” and Ibn Battuta. “Ibn Battuta” was recorded live in Abu Dhabi. She also collaborates with the band “L’Arpeggiata” in concerts in Europe. Since 2016 she has been working on a musical project entitled “The Anastatica project” which describes the journey of Rhodes of Jericho (Anastatica Hierohuntica), “from place to place, season to season”…

In 2016, she recorded the soundtrack of the TV series Muhteşem Yüzyıl – Kösem Sultan in Istanbul with the Turkish composer Aytekin Ataş.

Since 2011 she has been delivering Greek song seminars on a semi-annual basis in Marseille for the “Hiphaistia Association Européenne Pour l ‘Expression de la Culture Grecque”.

Since 2013 she has been in charge of teaching in the Choir of the Artistic Association of Folk Music Domna Samiou.

In 2002 the album “Ta tragoudakia mou poulo” was released with anecdotal songs by Meli Erythraias of Asia Minor, a product of music archives and personal research together with Socrates Sinopoulos, Vangelis Karipis and Panos Dimitrakopoulos. The album was voted by the music magazine “Echo artıs” as the best traditional music album for 2002.

In May 2007 she released a cd-single with three songs by Socrates Sinopoulos.

In 2008 she released her personal album with traditional songs “Amygdalaki tsakisa” (Music Corner). The album was also released in the USA. (Drawing in an almond, Golden Horn productions, 2013).

In 2010, together with Socrates Sinopoulos and Christos Tsiamoulis, they released the album “Politiki zygia” (Legend), a live recording of their concert in Utrecht in November 2008.

In 2019 she edited and presented the album South Toxo in Karpathos.