Violin for Preliminary and Lower and Intermediate Levels

Αρχική » Violin for Preliminary and Lower and Intermediate Levels 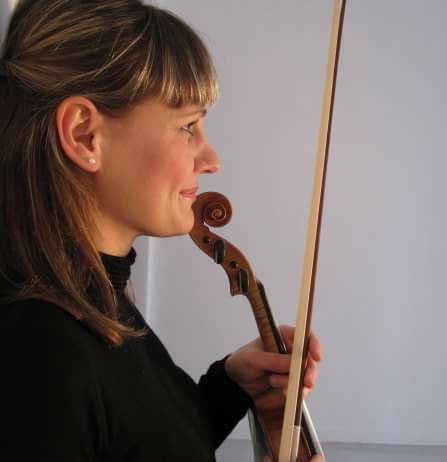 1. For children 5-7 years old.
First contact with the violin through musical interactive games.

2. For children 5-7 years old.
Group and individual music lessons – games and appearance at the final concert

a. ¨Violin is easy “(teaching through games and interaction)
b. “We learn to listen” (we play in small ensembles)

4. For children 10 -15 years old.
Through a diverse repertoire we focus on the perfect technical performance and creation of our personal interpretation.

“Music is a moral rule. It gives soul to the universe, wings to thought, takes off the imagination, gives joy to sorrow and life to everything ”
– Plato –

Iren Topouria-Papanikolaou was born in ex USSR, present Tbilisi, Georgia, in 1981. She began her violin lessons at the age of seven with Mira Freedman and Victoria Voscanova.

In 1992 Iren immigrated with her family in Thessaloniki, Greece, where she continued her music education as a scholar at the New Conservatory of Thessaloniki with prof. Irina Dragneva with whom she received her violin Performance Diploma in 2003 marked by Gold Medal award.

At the same year, she was accepted to the music department of the Utrecht School of the Arts in the Netherlands in the class of prof. Karen Turpie, a former student of Yehudi Menuhin, Max Rostal and Yuri Yankelevich, to receive her Bachelor of Music degree in 2007.

During her studies, she has participated in many orchestra projects, recitals and chamber music concerts. She has also specialised in music pedagogy applied to violin studies by taking pedagogy lessons with prof. Peter de Leeuw as well as Alexander Technique courses with prof. Criss Taylor.

In 2006 she won an audition for a job in the first violin section of the Magogo Chamber Orchestra in the Netherlands.

Iren teaches violin at the New Conservatory of Thessaloniki since 2007.
She uses the Suzuki violin method for the very beginners to be followed by the traditional Russian violin method in combination with Alexander technique.

In 2008 Iren was appointed to the Thessaloniki State Symphony Orchestra after audition.

She plays on an instrument made by Amédée Dieudonné in 1948 in Mirecour, France.

Iren is married and a mother of two children. She speaks Greek, Russian and English.