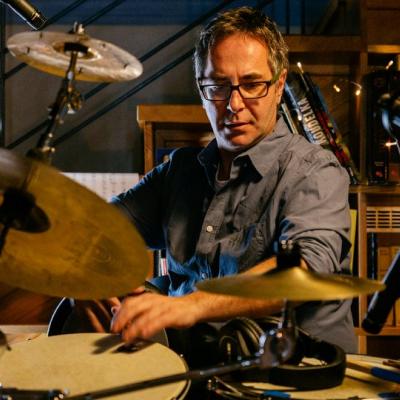 He was born in Athens in 1971. Since his childhood he has been involved in music (Tsiamouli children’s traditional choir, piano lessons, tambourine and oud).
He discovered percussion at the age of 16 and at the same time studied Byzantine Music, receiving his diploma from the Hellenic Conservatory.
Since 1993 he has been professionally involved in percussion with many collaborations in concerts and recordings with Greek and foreign composers and singers (Eleftheria Arvanitaki, Dionysis Savvopoulos, George Dalaras, Thanos Mikroutsikos, Socratis Malamas, Alpikoudos Ioannos, Alkidonos Ioannis Orpheas Peridis, Hayk Yazijian, Ara Dinkjian, Theodossi Spasov, Ros Daily, Domna Samiou etc.
In 1997, together with Petros Kourtis and Andreas Pappas, he created the percussion group KROTALA.

Since 2005 he has been participating in the MEDI MUSES training program for 2 years for concerts and seminars in Greece, Turkey, Egypt, Tunisia, Kuwait, England, Jordan.
Participates in the opening and closing ceremonies of the Athens Olympic Games in 2004.

In 2006 and 2016, at the invitation of the composer JOHN PSATHAS, he traveled to New Zealand for concerts and seminars.

Since 2016 he has been teaching at the Postgraduate Department of Traditional Percussion in the musicology of Athens.