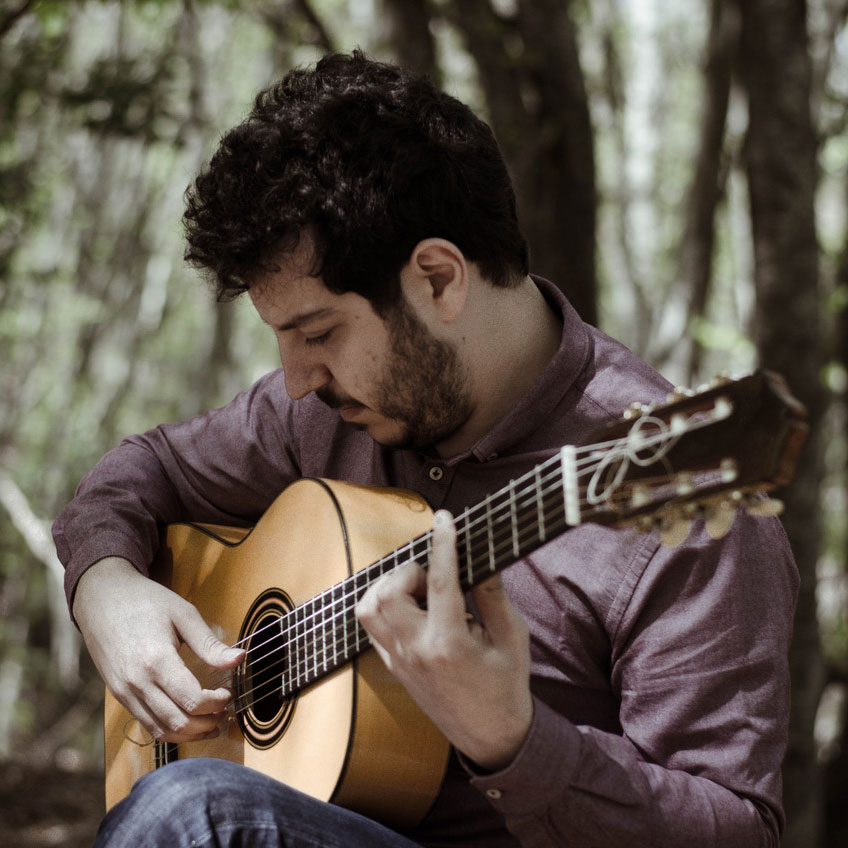 Spanish guitar – Traditions and evolution from the Renaissance to modernism.

This workshop proposes the deepening of the Spanish repertoire from the 16th century to the middle of the 20th century. On works written for modern guitar but also earlier ones such as vihuela, baroque, romantic, etc., special emphasis will be given to the historical approach of each period. This includes old notation such as tablatures, authentic methods, publications, organology, as well as execution practices (techniques, ornaments, sound production) through period instruments.Through such a review, the student is invited to be inspired and to expand his interpretive and technical skills through a wide range of Spanish repertoire.

Giannis Efstathopoulos is a guitarist, researcher and educator who has been living in Brussels since 2011.

He holds a PhD in Arts from the Free University of Brussels (VUB) and holds two postgraduate degrees: classical guitar and antique night instruments from the Royal Conservatory of Brussels. There he graduated with the highest honors under the guidance of the famous Antigone Goni and Xavier Diaz-Latorre respectively. From 2014-2021 he worked and taught at the same institution as a guitar researcher and assistant while in 2019-2021 he also taught historical performance at the postgraduate guitar department. The teaching activity in recent years also includes public music schools in Flanders, the Spanish Cervantes Institute and from 2021 the State Conservatory of Bruges.

His first steps on the guitar were made at the age of 9 at the Municipal Conservatory and the Music School of Drama while his basic studies were completed at the University of Macedonia-Department of Music Science and Art and at the State Conservatory of Thessaloniki by Elena Papandreou and Thanos Mitsalas . He then attended a scholarship to the historic music academy Chigiana in Siena, Italy with the famous Oscar Ghiglia where he received the title “Diploma di Merito”.

During his studies he has actively participated in seminars with famous guitarists such as: Rafael Andia, Sergio and Odair Assad, Zoran Dukic, Sharon Isbin, Margarita Escarpa, Costas Kotsiolis and among others flamenco guitar with Gerardo Nuñez and lute with Rolf Lis . The classes he attended with Carles Trepat in Cervera, Spain were crucial: Catedra “Emilio Pujol” and his invitation to participate in the reconstruction of the “Lira Orfeo-Miquel Llobet” orchestra.

His main artistic activity is in the field of historically updated performance from the Renaissance to the early 20th century. He often performs Spanish music playing renaissance violins and baroque guitar while he has specialized especially in late romanticism up to modernism on authentic instruments and strings of the time.His research on “The Concert Guitar 1920-1939 in Spain: Recovering a Lost Tradition / Performance” led him to his first album with works of Spanish modernism, which was released in March 2019 with the Belgian company “Passacaille”.

He has given concerts in countries such as Greece, Italy, Spain, France, Belgium, the Netherlands in famous venues such as Palais des Beaux Arts, Flagey (Brussels), Palacio Chigi (Siena), Seu Vella (Lleida), King’s College (London) and Megaron Music of Thessaloniki.

In addition to his concert activity, John has given lectures at various academies, and at major guitar conferences such as “IGRC-University of Surrey” -England, “The instrument of change-Melbourne Conservatory of Music” -Australia, 3rd Altamira guitar symposium- Hong Kong. while his articles have been published in international journals.