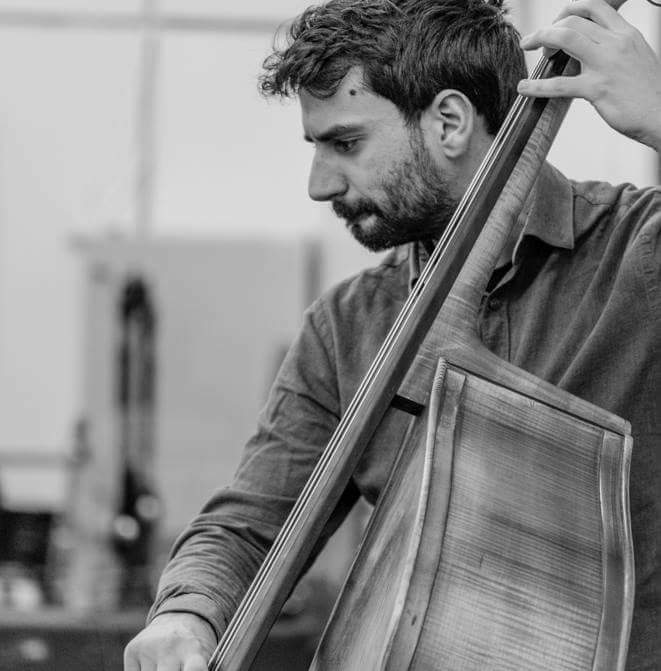 The workshop focuses on double bass and electric bass students of all levels and depending on the level of the students we will deal with technical issues concerning the instrument, its role in a musical ensemble, improvisation, rhythm, basic characteristics around jazz. and classical music but also their modern trends and forms.

Konstantinos Manos was born in Serres in 1990. He started playing the cello at the age of 9 and then engaged in electric bass and double bass with his teachers Costas Domenikiotis, Giotis Kiourtsoglou and Anastasios Kazaglis respectively. where in 2007 he took lessons in classical piano, cello, but also Harmony. In 2007 he entered the Department of Music Studies of the Ionian University, where he studied Jazz. In 2010 he participated in the International Conference of Jazz Schools (IASJ 2010), in The Hague, the Netherlands. University and in the same year he received a scholarship to the Berklee College of Music in Boston.

In 2015 he received a Diploma in Classical Double Bass graduating with honors and in 2016 he completed his Master’s Degree with Excellence at the Ionian University, with a research topic “The solo double bass”.

In 2018 he released his first personal album entitled “After the storm” and has also participated in a large number of records of Greek discography.
Since 2020 he lives and works in Thessaloniki as a member of the Thessaloniki State Orchestra. He has also collaborated with the Athens Municipal Orchestra and the Hellenic Youth Symphony Orchestra.